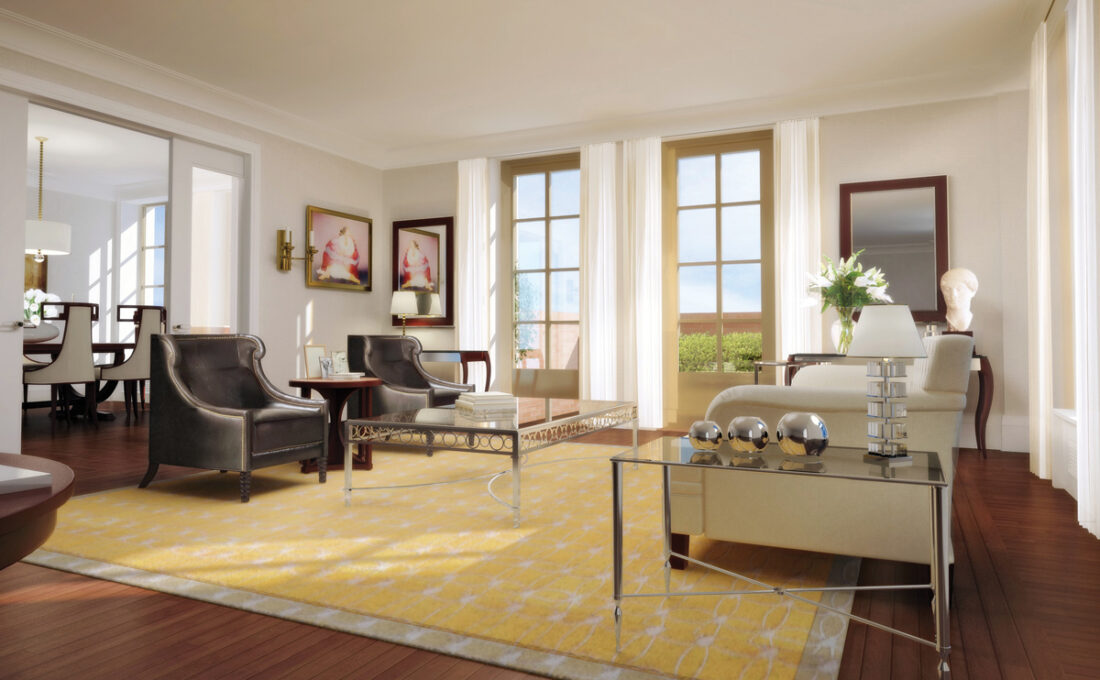 The building was originally built in 1927 as a 23-story residential hotel and clubhouse for women with 700 single rooms and a shared bath arrangement. The handsome building – landmarked in 2011 – features an eclectic mixture of Italian, Romanesque, Gothic, and Renaissance ornament. Famous guests throughout the years have included Greta Garbo, Grace Kelly, Eudora Welty, Cloris Leachman, Liza Minnelli, Candice Bergen, Cybil Shepherd, and Ali McGraw.

In the 1970s and 1980s, the owners converted the building into a traditional hotel, with male guests being accepted after 1981. The number of rooms was reduced to 306.

BPG acquired the Barbizon Hotel in May 2001 from Ian Schrager Hotels (which had undertaken a $32 Million renovation in the prior three years) to operate the property as a hotel as part of their Melrose brand. This was part of a broader business strategy encompassing a portfolio of boutique hotels in Dallas, Texas and Washington, DC.

Favorable Basis: BPG purchased the property for $86,896,499, equivalent to approximately $410 per square foot.

Strong Cash Flow: Despite under performing the local market, the property was generating about $9.7 Million of net operating income, representing a 10.8% acquisition cap rate and return on invested capital.

Strength of Market and Barriers to Entry: The New York City hotel market is among the strongest business and leisure markets in the world. The site represented an excellent opportunity to secure a presence in the affluent Upper East Side neighborhood. The property was well-located to both business and tourist destinations, with a notable lack of available sites for nearby new hotel development and significant barriers to entry for additional competitors.

BPG acquired an underperforming property with the intent of repositioning and upgrading the hotel as a value-added play in the active New York City hotel market.

With an all-in basis of $90 Million (purchase price plus acquisition costs), BPG placed $60 Million in debt (at 7.9% interest and 25 year amortization) on the property. The balance of the capital stack ($30 Million) represented equity.

At acquisition, the competitive set and surrounding market had an 82% occupancy rate with a $230 ADR (average daily room rate). The hotel had an occupancy rate in the mid 60% range and a rack rate below the market comps.

BPG began a $3.7 Million upgrade to reposition the property and to outperform the market – with a target 85% occupancy rate and an ADR in the low $300’s.

The business plan envisioned a 5-7 year hold and an exit strategy with a sale at the end of the repositioning and stabilization period to a seasoned operator.

Four months after acquisition in May 2001, New York City was struck by terrorists on 9/11. The impact of the September 11 terrorist attacks on New York tourism caused a hotel market downtown that directly affected the Melrose.

BPG was in the midst of the property repositioning and ultimately spent about $5 Million to complete the upgrade. However, the recession and market collapse affected operations for the next three years – with occupancy rates and ADR’s below initial acquisition and business plan pro-forma.

Operating losses and additional capital requirements during this period causing BPG to conclude that it was increasingly unlikely that it would successfully execute its intended business plan.

BPG decided to evaluate its exit options. Senior management interviewed potential buyers in the hotel industry and concluded an outright sale would likely result in a significant loss of its initial equity.

While the hotel market had continued weakness, the residential market for conversion and new development for condominiums was exceptionally strong. The market had rebounded from its low after 9/11 and pricing continued to reach new records in quarter after quarter, approaching $1,500 per square foot for new development sales.

BPG chose to offer the property to residential developers and converters in the hope of achieving a greater return on invested capital. However, tenders from these prospects valued the property similarly to hotel operators – thus also presenting BPG with a potential loss.

In light of the market conditions and lack of a profitable exit, BPG decided to undertake the conversion of the Barbizon on its own. The hotel was closed in June 2005 and BPG began a gut conversion to luxury condominiums.

Realizing that an understanding of the market potential was the key to a successful conversion, BPG interviewed all the major Development Marketing firms in Manhattan. They chose Prudential Douglas Elliman and the team headed by Andrew Gerringer.

Douglas Elliman evaluated the property, location, building potential, and surrounding market – creating a new business plan and development concept that would take advantage of the booming demand for high-end and luxury residential units. A key component of the plan was to engage the appropriate team of designers, architects, and planners to bring the concept to fruition.

The cornerstone of CentraRuddy’s plan was the creation of 20,000 additional salable square feet. Innovative planning included moving the building core, relocating existing stair towers, eliminating two existing elevator shafts and installing a new scissors stair in its place. In addition, the architect inserted an entirely new floor into a double height space, creating a new duplex apartment on the 20th and 21st floors.

Work included restoration and recreation of existing iconic brick-and-stone detailing, the addition of ornamental ironwork to articulate the building’s form, and the design of a new building crown to mask modern mechanical equipment. The architects replaced existing small punched windows with period-sensitive custom French casement doors and windows, enhancing the building’s architectural proportions and increasing the light within by 30 per cent.

Construction on the project began in 2006. A new $175 Million note (including a refi of the original $60 million, essentially $85 million in new funds – double down) was placed on the property to cover the cost of renovation, carry to date and interest during construction. It was to be repaid in full with interest out of the sales proceeds of the condo units.

New York City law required that BPG preserve the tenancy and rights of existing long-term hotel residents. BPG bought out a number of tenants and 16 residents remained throughout the reconstruction. Twelve residents agreed to be relocated (with incentives) to a lower floor while four tenants remained in their rooms on the

8th, 9th, and 11th floors. Hotel services and amenities had to stay in place during the entire project.  The cost of maintaining these residences was $350,000 per year.

One retail tenant – Equinox Fitness Clubs – occupied the larger of the two commercial spaces (nearly 43,000 square feet) throughout the renovation.   They had an existing 25-year lease with 5-year CPI adjustments (from 1997). As of the sale, the rent was considered 65 – 70% below market.

BPG had to negotiate a closedown contract with the New York Hotel and Motel Trades Council, AFL-CIO (Hotel Trades Council). This required creating a callback list for workers when the new condominium started operations.

All the furniture, fixtures, and equipment (FF&E) was auctioned. BPG received a flat fee of $125,000 from the auctioneers. The unsold remainder was peddled in a sidewalk sale.

The entire building (except for the remaining hotel residents and commercial space) was stripped to the bare bones and slab condition, with removal of all mechanicals, interior materials (including asbestos), and existing windows.

Given the challenge of working around existing tenants and to minimize the impact of the renovation, the new units were finished from the top – down. This effectively created a stunning “reveal” of the revitalized building as the scaffolding and protective sheeting was removed.

The Barbizon / 63 sales program was unveiled in early 2006 with a staged release of available units (once again – top down) to control inventory and manage pricing.

Twenty-eight (28) units were presold in Spring 2006, demonstrating the strength of the offering. Subsequent releases of units and filings with the New York State Attorney General’s office incorporated numerous price increases to reflect the demand and desirability of the new condominiums.

Closings started 2007, with a milestone reached in December 2007 when the original $60 Million acquisition debt was paid off.

All units except for PH 4 have been sold. Total sales to date for the residential units (including the 16 hotel units which recently sold for $3 million) are approximately